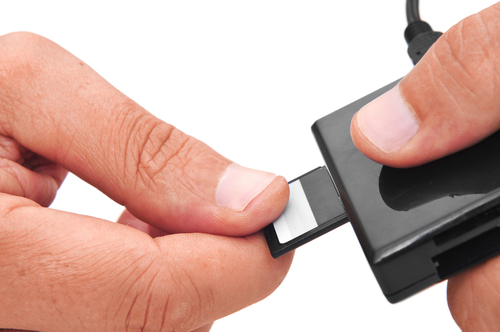 If you use a smartphone or digital camera, you’re probably familiar with SD cards. They’re the small cards that store data using flash memory. For most users, they only think about their SD card when they’re transferring contacts to a new phone or removing pictures from their camera. As Stephen Shankland reports for CNet, however, a new technique exposed by security researchers has demonstrated how vulnerable SD cards are to “man in the middle” attacks.

A man in the middle attacks is true to its name. When data is transferred from one location or device to another, a third party intercepts that data in order to monitor, modify or copy it. This allows a criminal to gain access to valuable data like credit card information, or encryption keys. They could also substitute malicious files for trusted files in order to infect users with malware.

The vulnerability in SD cards exists in the cards’ microcontrollers. These are like built-in computers that manage the data stored on the SD card. By reverse engineering an SD card, researchers were able to install and run new firmware on the microcontroller then installed an application that would intercept data being sent by the device.

The specific attack used in the researchers’ demonstration doesn’t work for any flash-memory device because of variations in the microcontrollers, but this example exposes vulnerabilities for all devices using flash memory. This means similar attacks could be used to steal data from solid-state drives or eMMC storage for smartphones.

This is yet another example of the vulnerability of mobile devices. With millions of users and a general lack of security in place, mobile devices are an inviting target for hackers and new threats are emerging all the time. While this particular attack will need a change to the make-up of SD cards to close the vulnerability, other threats need only smarter user behavior. Remember that your mobile device faces the same risks as your PC and protecting it requires vigilance.